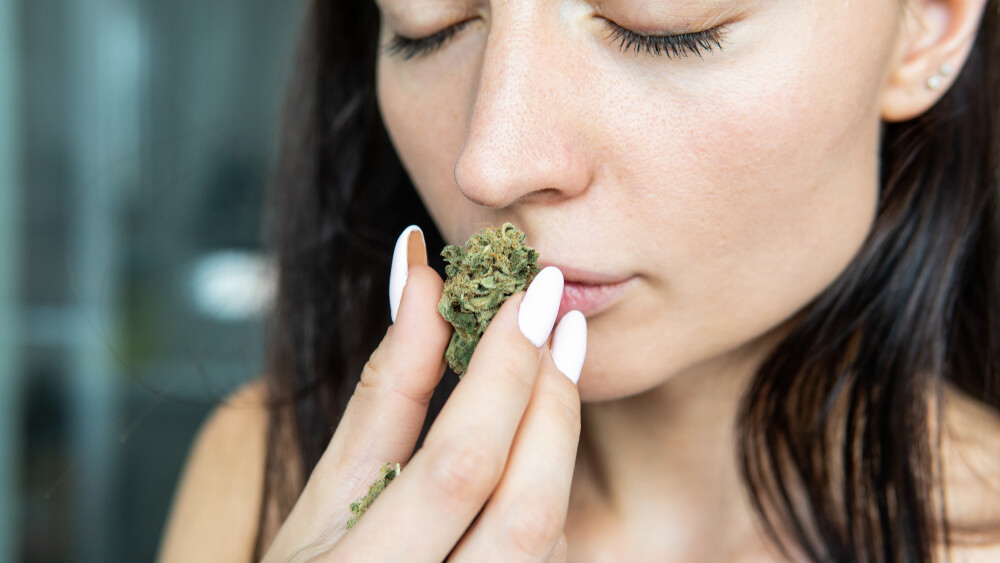 Veteran and newbies cannabis users will tell you that they are drawn to a particular strain because of how it smells. The name of this plant comes from its aromatic nature, being able to exude different scents. But those who have never come close to marijuana can wonder what cannabis smells like.

Cannabis plants are known for their iconic pungent smell, especially when the buds burn. However, they also have other scents and different flavors. That depends on their terpene profiles and compounds present in the buds.

But how does weed smell like? What causes the odor and flavor of marijuana? Can there be a weed with no scent? Read on for detailed answers to clear any doubt in your mind!

The smell of marijuana varies depending on the strain and its terpene profile. Some are fruity, skunky, piney, woody, citrusy, etc. Cannabis users are attracted to specific weed strains according to how they smell. For example, some people like fruity smelling weed strains.

As mentioned, the scents are coherent with the terpene profile. We will discuss which terpenes are responsible for which cannabis smell later.

Experienced cannabis users can deduce the expected effects of marijuana from its smell. And with regular usage, it is possible to distinguish the smell of marijuana and classify the strains.

Like scents, flavors of marijuana also vary from one marijuana strain to the next. Also, the loudest smelling strains are some of the tastiest and most flavorful. But what are the most common weed flavors?

The best smelling weed strains are the fruity ones. This category contains marijuana strains with mango, pineapple, banana, berry, and other fruit tastes. Here are the details of the most common weed flavors:

As mentioned, the smell of cannabis is determined by its terpenes. The aromatic terpenes in marijuana give them the odor profile we cherish so much. These are compounds found in the flower and other parts of the marijuana plant.

Check out this terpene tastes and effects chart for more information:

You will identify the good weed by how they smell. Every beginner’s guide to smoking weed probably mentions the marijuana odor. It is a way of identifying different strains and choosing the best.

Good weeds are professionally cultivated and cured, keeping all the standards. Such strains of cannabis smell louder and are characterized by a pungent and pleasant aroma. These are indicators of quality.

Most high-quality or good weed smells like pine and diesel. Good weeds often turn skunky due to skunky terpenes. You will notice that when you pay attention to how marijuana smoke smells.

Good-smelling weed flowers have a distinct, pungent, and hard-to-mistake aroma. Marijuana that smell so strong are the most effective it is.

Now that you know what a good cannabis aroma should be, what does bad weed smell like? Low-quality flowers have a range of quirky scents. A moldy weed smell or musty aroma gives you a hint of poor flower quality. Also, if the weed has no smell, it is unlikely to be what you want to buy.

The quality of weed deteriorates depending on how it is cured and stored. Most bad marijuana strains are likely hidden from light and have been on the shelves for more than one year. The unpleasant marijuana taste and aroma also result from poor handling.

Generally, bad weed buds are characterized by moldy weed taste and fake weed smell. Some may fail to register a sensible aroma.

Synthetic marijuana, also known as fake weed, K2 weed, or spice, has been around since 2002 and has been used by marijuana users as an alternative. As the name suggests, they are synthetic products created in laboratories to help scientists and researchers understand the effects of cannabinoids on humans.

Despite the claims that synthetic cannabinoids are created from a natural material, they still have fake cannabis odor and taste. It is easy to distinguish the artificial cannabis smell from natural fragrances.

Synthetic marijuana is not regulated and not related to the cannabis plant. The creators use chemicals of choice, making it nearly impossible to know what K2 weed smells like. However, most have a stale, pungent, and fishy smell that sticks around sometimes. And since chemicals are used, some synthetic cannabis smell like pesticides.

Moldy weed is unhealthy. That is why you should know how to identify it from the weed odor before smoking it. Smoking moldy weed is likely to cause nausea, coughing, and vomiting. But if you are allergic to mold, the effects can be detrimental. You can end up with inflammation and other life-threatening symptoms.

Moldy weed has a grayish-white appearance due to the powdery substance on the buds. It is characterized by a distinct cannabis odor that sets it apart. They exude a musty or mildew smell, sometimes giving off a hay-like scent, urine, or human sweat. Use these factors to make the best judgment and keep off any marijuana with a moldy weed scent.

Weed With No Smell: Is It Okay?

No. Cannabis plants are genetically aromatic. As a result, a lack of smell or fragrance from the buds or smoke may show an out-of-date flower. Marijuana can pass its prime and the weed loses its smell entirely. The weed has no smell or low order is also likely to be off.

Weed may also lack the smell if it is genetically modified or terpenes extracted from it. It is irrefutable that some breeders and creators are claiming to make weed with no smell. However, most have only come up with low-odor marijuana.

Always go for the good-smelling weeds. It indicates the quality of the flower and the effort put into curing and storing it. The Lodge dispensaries are proud to bring you the loudest smelling weeds with the best tests. Check our menu for tasty weed strains. You will find Indica, Sativa, and exotic hybrids, and quality is always guaranteed.

Some weeds smell like skunks because they produce prenylated volatile sulfur compounds (VSCs). This is a subset of the volatile organic compounds (VOCs).

What does weed smell like in the air, when it’s smoked, and on a person?

Most marijuana users describe the smell in the air as earthy, herbal, and woody. There are also undertones of lemon, apple, diesel, etc.
Marijuana smoke smells like lemongrass, pine, fire, and wood. These fragrances often stand out, but you can also smell other notes ranging from earthy to citrusy and sweet.
The marijuana smell can stick to a person’s clothing, hair, or skin. It is usually skunk but comes with a mix of fire, smoke, sweat, and the natural scent the person produces.

Different flavors of fake weed exist because of the various chemicals used in its creation in the laboratory. But stale, pungent, pesticide and fishy tastes and scents stand out.

K2 spice weed flavor profiles are complex. Some have a pungent odor similar to natural marijuana. Other K2 spice weed smells like ammonia and their stale scents stick on clothes.

Old weeds have a musty smell or you can say the weed smell like hay. The out-of-date marijuana has an off taste, indicating the presence of mold growing on it.

Fentanyl tends to have no unique smell. As a result, it is nearly impossible to identify fentanyl-laced weeds just by smell because they retain the original marijuana odor.