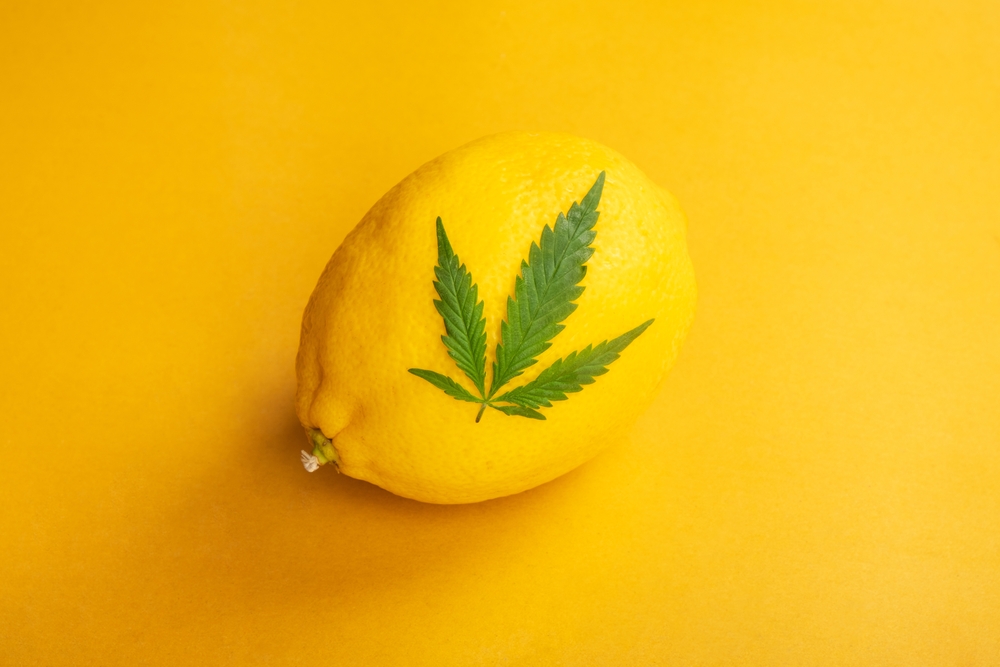 Marijuana users fall for certain weed strains because of their smell or taste. Their effects can also play a pivotal role in that decision-making. But it’s the aroma and flavor that attract people for the first time.

Different marijuana strains smell and taste differently depending on their terpene profiles. In our previous posts, we looked at the loudest smelling strains. Some come with diesel, sour, fruity, and many other tastes. We will focus on the best lemon weed strains in today’s post. We will present detailed information about what makes them smell like lemon and list the best lemon marijuana weeds. Keep reading to find out!

A weed that smells like lemon has a specific terpene profile different from diesel weed strains or others. Lemony weed strains are rich in limonene, which is the terpene responsible for their lemon-like smell and taste. Limonene and other cannabinoids are known to produce uplifting effects. That is why most lemon weed strains are used in combating depression, anxiety, and inflammation.

Sour weed strains also contain limonene, but that component is low compared to lemon cannabis. The latter weed strains have a high level of limonene. That dominance manifests itself in how these weeds smell and taste.

It never matters whether the weed strain is Sativa or Indica. If it has high levels of limonene, it will be grouped as lemon marijuana. That is why Indica, Sativa, and hybrid marijuana strains with lemon aroma and flavor exist. What matters most is the level of limonene terpenes.

Lemon strains of weed are a subgroup of fruity weed strains. Many people like weed strains that smell like fruits, and the lemon flavor is just one of them. In this category, we will look at the top-smelling lemon cannabis strains. These lemony weed strains can be Indica, Sativa, or hybrid. Let’s dive right in.

Super Lemon Haze is a highly Sativa-dominant lemon cannabis strain bred by Green House Seeds. It resulted from a cross between Lemon Skunk and Super Silver Haze. With that background, you can expect Super Lemon Haze to be on the top of this list of lemony weed strains.

Super Lemon Haze is highly potent lemon marijuana that packs up to 25% THC. It is an award winner that came first in the 2008 and 2009 High Times Cannabis Cup.

Super Lemon Haze comes at the top of this list of lemon strains because of its sweet and tart, lemony tastes and aromas. It has a dominant zesty and citrusy smell, which makes it inviting for lovers of lemon flavored weed strains.

Lemon OG, also known as Lemon OG Kush, Presidential Kush, or OG Lemon, is an Indica-dominant hybrid marijuana strain bred by DNA Genetics. It resulted from a cross between a true Las Vegas Lemon Skunk cut and OG #18 cut. Like most lemon marijuana strains, Lemon OG is also potent, with a high THC of 22%.

Lemon OG is famous for its unmistakable lemon taste and smell. Marijuana users who like a weed that smells like lemon cannot resist Lemon OG Kush because it offers a perfect combination of lemon, citrus, and skunk flavors in one.

Besides, Lemon OG comes with sleepy and relaxing effects that many people like. It is one of the preferred lemon-smelling strains for nighttime use or when you just want to unwind.

Amnesia Lemon is a Sativa-dominant hybrid strain created by Barny’s Farm and Soma Seeds. This strain is a cross of Amnesia Haze and Lemon Skunk, giving it its characteristic lemony aroma and flavor. It is also an award winner, coming first in the 2004 Cannabis Cup.

Amnesia Lemon is an equally potent lemon weed with an average THC of 21%. It became a household name after its victory in the Cannabis Cup, and people like it for its smell and taste. The obvious overtones to expect from Amnesia Lemon are the citrusy and lemony flavors and a mix of herbal tastes. You will also find hints of ginger, licorice, and marshmallow.

Experienced smokers with a heightened sense of smell can also attest that Amnesia Lemon smells like lime, sandalwood, apricot, and nectar. It, however, has a dominant lemon aroma.

Gorilla Glue Lemon has overtones of freshly-squeezed lemon and diesel. It also has other flavors and aromas inherited from its haze heritage, but lemon and citrus are the dominant ones. This weed strain is also famous for its pain-relieving and relaxing effects. It creates a foggy head high that lasts for a long time.

Lemon Tree is a perfectly-balanced hybrid strain created by crossing Lemon Skunk and Sour Diesel. It owes its lemony flavor and aroma to its parents, which also have the same flavor profile. Lemon Tree is a potent lemon weed boasting a high THC of about 20-25%.

Lemon Tree is an award winner, emerging first in the 2014 Seattle Cannabis Cup. That was due to its potency and flavor. It is one of the lemony strains that can claim to satisfy users with the best taste and lemony aroma. Breaking the buds of this strain and smoking it reveals a zesty lemon and fragrant skunk.

The smell is sharp and characterized by diesel earthy overtones.

This category of lemon tasting weed strains consists of Sativa and Sativa-dominant hybrids. Let’s look at a few of the best Sativa lemon strains.

Super Silver Haze is one of the best smelling weed strains out there. It is a heavily Sativa-dominant hybrid created from a cross of Skunk, Northern Lights, and Haze strains. This Sativa lemon weed was bred by Green House Seeds. Some people refer to it as SS Haze in short.

Super Silver Haze is a perfect choice for any lover of lemon Sativa Strains. It exudes spicy, skunky, diesel, and sage-like scents. Flavor-wise, Super Silver Haze has overall herbal, spicy, sour, and earthy overtones. This combination makes it one of the best lemon scented weed strains.

Sour Lemon OG, also known as Sour Lemon or OG Sour Lemon, is a Sativa-dominant formed by crossing California Sour and Lemon OG. It is not the most potent lemon weed on this list, but it still defends its position with its scent and flavor. This lemon weed bred by Emerald Triangle Seeds has an average THC of just 18%.

Sour Lemon OG is famous for its sweet lemony lime with a sour taste. Some users say it emits a sour apple aroma when the buds burn. But if you closely inspect well-cured buds, you can pick up a dank, earthy scent. These are all inviting flavors. However, don’t let it fool you into overdosing. Sour Lemon OG has an electrifying cerebral buzz that only the experienced may tolerate when taken in high doses.

Lemon Pie is a Sativa-leaning hybrid strain bred by Leafs by Snoop. It is a cross of Amnesia Haze and Skunk #1, leading to a relatively potent bud that tops at a THC of 22%. This is one of the Sativa lemon strains praised for their unique flavors and creativity-boosting effects.

Lemon Pie is packed with a delicious citrusy, lemony, and nutty flavor with hints of fruity herbs and spices. That combination gives this strain a delightful taste with nuttiness finishes. Its fragrance also takes after the flavor. The dominating scents include pungent, lemon, citrus, and diesel.

Some Indica and Indica-dominant marijuana strains are also rich in lemon terpenes. We will highlight only the best Indica lemon strains in this section: the Lemon Bubba and Lemon Diesel.

Lemon Bubba, also known as Super lemon Bubba, is an Indica strain that resulted from a cross between lemon Kush and Bubba Kush. It is known for its slightly euphoric and relaxing stone and its taste.

Lemon Bubba buds are one of the best Indica lemon strains on the market. It bears frosty green buds covered with orange hair. This pure Indica strain is rich in citrus terpenes, making it have a citrusy smell with an earthy and lemony taste.

When smoked, Lemon Bubba causes calmness and body numbing that reduces pain. You will settle into a relaxed state of mind that can get you glued to the couch.

Lemon Diesel is a heavily Indica-leaning hybrid strain created by crossing California Sour and Lost Coast OG. It warps our list of the best lemon weed strains because of its taste and flavor.

Lemon Diesel is a classic choice of an Indica lemon weed for any Indica lover. It is best known for its super heavy high, and delightful flavor caused by lemon terpenes. The aromas are skunky and sweet with undertones of tart diesel, lemon, and pepper. It has a complex flavor profile that can be lemony, peppery, or sweet.

Lemon Diesel has a heavy body high that hits fast. It starts with a cerebral rush before giving way to a full-body tingly feeling.

Lemon-smelling marijuana strains are popular among users. They are among the loudest smelling weed strains with delightful flavor in the cannabis kingdom. You can also taste them if you like the lemony taste and aroma. Visit The Lodge Cannabis dispensaries to ask for top-rated lemon strains. We guarantee the best service and quality of any weed you buy at our dispensaries.

What is lemon cannabis?

Lemon cannabis is a weed strain that smells and tastes like lemon. That is because they have a high concentration of limonene terpenes.

Some weeds smell and taste like lemon because of limonene terpenes. Terpenes are compounds responsible for the aroma and flavor of weeds.

What is the best lemon strain?

The best lemon depends on your perception. You can consider Super Lemon Haze the best, but you have more options to explore.

Are lemon strains Indica or Sativa?

Lemon weed strains can be Sativa, Indica, or hybrid. What matters is the level of limonene terpenes that the weed contains.

What strains came from Lemon Haze?