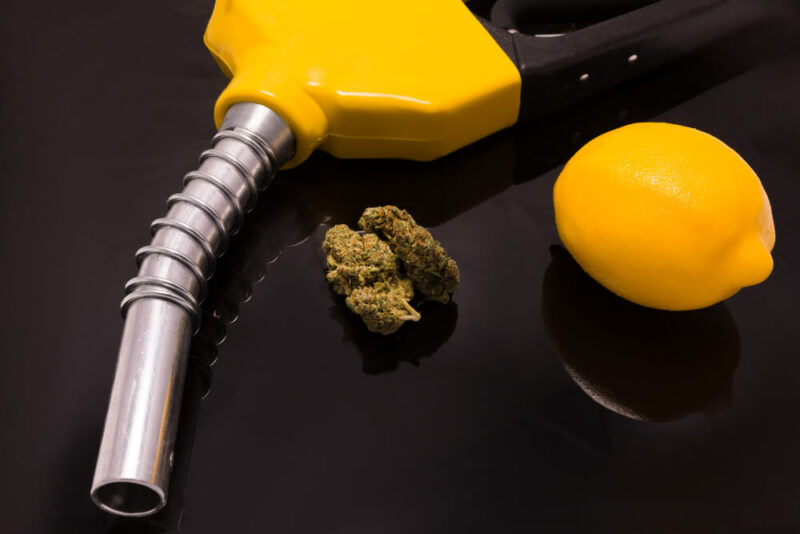 Different weed strains have varying aromas. Some are skunky, gassy, pungent, earthy, and many other fragrances. Also, the level of scent differs from plant to plant, depending on the concentration of terpenes.

It is the aroma of cannabis that makes users prefer one weed strain over the other. But what brings this difference? What are some of the loudest smelling strains? We will be answering all questions and giving examples of marijuana strains under each category. You can refer to our previous posts on the best smelling weed strains and fruity weed strains to learn more about the aromas of the best cannabis strains.

Cannabis strains have a signature aroma. It is what draws people to some weed strains while moving away from others. Also, the fragrance can give you an insight into the taste and effect to expect when you finally inhale your favorite flower.

The fragrance of the strongest smelling strain is not tied to whether it is an Indica or Sativa strain. Marijuana has certain compounds known as terpenes, responsible for skunky, gassy, or earthy fragrances. About 170 terpenes have been identified from marijuana plants, out of which 17 are dominants.

A given weed strain can contain over 60 terpenes, but only the prevalent ones will manifest in the fragrance. For instance, the skunkiest smelling weed strains are rich in myrcene terpenes. That tells you that any skunky weed strains you will meet out there have a high concentration of this terpene called myrcene.

Updated:
According to the study published November 12, 2021 in the journal ACS Omega a team from California’s Abstrax Tech discovered a new family of prenylated volatile sulfur compounds (VSCs) which create this skunky odor. It definitively confirms the chemical origins of the odor of cannabis.

There are many skunky weed strains you can try if you love this fragrance. However, most novice smokers might find it unpleasant and might consider less-smelling weed strains. Fortunately, some skunk smelling weed strains have other sweet scents that cloud the skunky aroma for inexperienced smokers to try out.

The following are some weeds that smell like skunk you can ask for at a dispensary:

Sour Diesel is a Sativa-dominant strain with a parental lineage of Chemdawg 91 and Mass Super Skunk. From its origin and name, we can tell that this is one of the loudest smelling strains on the planet. Its flavor and effects are equally strong, taking a toll on your body in just a few minutes.

You will be hit by a skunky and sour smell as the weed is consumed up in smoke. Once inhaled into your system, Sour Diesel triggers a cerebral high with a feel-good factor. Medicinally, this strain is the best for alleviating the signs of depression, chronic fatigue, and anxiety. Also, read about the best cherry cannabis strains.

Trainwreck may haven’t won any international award, but it is the right weed strain to look for when you need a skunk smelling weed. It has a very complex lemon-menthol-pine aroma and flavor that dominate as the plant matures and flowers. The pungency of this weed makes smokers cough as they inhale the smoke.

Trainwreck is a thrilling hybrid strain resulting from a cross between Thai, Mexican, and Afghani. Its mind-blowing effect hits you like a train, from which its name originated. It is a Sativa-dominant hybrid strain commonly used to alleviate chronic pain, stress, PTSD, and many others.

Cannabis strains can have varying smells and flavors depending on the terpenes that are dominant in them. Apart from the skunk smelling strains, we also have gassy weeds or popularly known as diesel strains. These are usually the loudest smelling strains characterized by jet fuel flavor and a long-lasting high.

Scientists have not singled out the terpene responsible for the Diesel or gassy scent from the weed strains. Instead, they believe that it is caused by compounds such as humulene, myrcene, linalool, and pinene.

Gassy strains are liked by many people for various reasons. If you are in that group, then the following are the best gassy weed strains you can try out:

A little information about the terpene profile of Chemdawg is available. However, we confess that it is one of the gassy strains you will ever find in the cannabis market. It is known for its unique fuel-like fragrance that is challenging to contain in a jar or a bag. It is the strongest smelling strain in this category.

Chemdawg is a nicely balanced hybrid strain that has been popular for many years because of its pungent aroma and effects. If you are looking for gassy strains to make your day, then you better start with it. It is the best choice when it comes to choosing diesel-like, chemical-flavored weed strains.

Gelato weed strain is the best choice for beginners who cannot withstand some of the strongest smelling strains out there. It’s mainly dominated by a fruity aroma and gassy undertones. That means you will not feel the high pungency like in other loudest smelling strains.

Gelato is a descendant of Girl Scout Cookies and Sunset Sherbet. Its parents are also dominated with berry aroma but also feature a gassy flavor.

Cherry Diesel, also known as Cherry Turbo Diesel, is a perfectly balanced hybrid weed strain resulting from a cross between Cherry OG and Turbo Diesel. This marijuana strain is on our list of strongest smelling strains for its pungent smell and sweet diesel undertones. When smoking it, you will feel the scent of pungent berries.

Cherry Diesel is a highly addictive strain with uplifting and energizing effects making it a perfect treat if you want to get up and get going. Its high settles with a sense of motivation and purpose.

The fragrances from many of the classic weed strains are earthy, comparable to rich, fresh soil. These earthy strains are also characterized by fresh, piney qualities that seem as if you have uprooted a plant from the ground and threw it into your system. Some earthy smelling strains have also been associated with woody or ash flavor.

There are many earthy strains in the market today that can be overwhelming for people to choose from. If you like the smell and taste of such marijuana strains, then here are the best three to go with:

Green Crack weed strain has an earthy aroma and flavor with sweet citrus accents. These are produced by the dominant myrcene and caryophyllene and less prevalent earthy terpenes. Green Crack has uplifting and energizing effects that many users have praised as one of the best earthy strains for daytime use. If you need to become more productive, taking some puffs of this weed strain is the way to go.

Northern Lights is a descendant of Afghani and Thai. This 95% Indica weed strain has an earthy aroma and flavor and is best known for its heavy knock-off. You only need a few hits of Northern Lights to become relaxed, sleepy, and dreamy.

Northern Lights is not one of the earthy smelling strains to think of for daytime use. Probably, you can look for it for a lazy afternoon or evening use.

Strongest smelling strains at The Lodge

If you are looking for earthy, gassy, or skunky weed strains, make no further steps. We have the skunkiest smelling strains you need. At our menus, you will find high-quality flowers at the best prices. We also guarantee the best customer experience at any of our dispensaries. The Lodge Cannabis allows you to acquire and enjoy the loudest smelling strain of your choice.