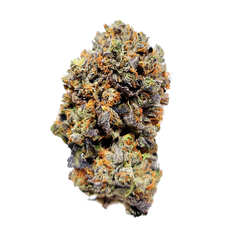 Garlicane is an Indica-leaning hybrid marijuana strain consisting of 80% Indica and only 20% Sativa. It resulted from a cross between GMO Cookies and Slurricane. Despite the less popular parental lineage, Garlicane has surpassed expectations. It is a highly potent strain with a THC level of about 23%.

GARLICANE IS A RELATIVELY SHORT PLANT THAT TAKES 8-9 WEEKS TO FLOWER INDOORS AND PERFORMS WELL OUTDOORS.

Garlicane marijuana strain appears like garlic with its milky egg hue that covers its buds. Its feathery stigmas stick out like a wisp of smoke. The buds are built with a freeze-frame explosion and stack on each other. It has dark olive-green nuggets, yellow-orange hairs, and a thick layer of frosty white crystal trichomes summarize the appearance.

This Indica-dominant strain grows up to about 80 cm tall. Growers report good and equal performance both indoors and outdoors. If well taken care of, Garlicane can yield up to 400 grams of buds per flower. The growth difficulty is rated moderate. So, you can try it as a beginner if you are ready to put your skills to the test.

Garlicane is famous for its super delicious flavor. If you love Indica strains, consider tasting the buds that come from Garlicane. As the name suggests, it packs a super savory garlicky flavor. You will also feel the hints of fresh spices and a touch of earthiness, pungent pine, or woody strain. Some users have also reported feeling pepper, grassy, and diesel flavors.

The Garlicane’s high comes fast and hits hard. You quickly get out of touch with the outside world as soon as you exhale the smoke. The high begins with a fleeting mental rise that settles into a relaxing feeling that induces sleep. It comes with numbing chills that relieve you of any pain and wash away your woes, leaving you sedated and sunk into the couch.