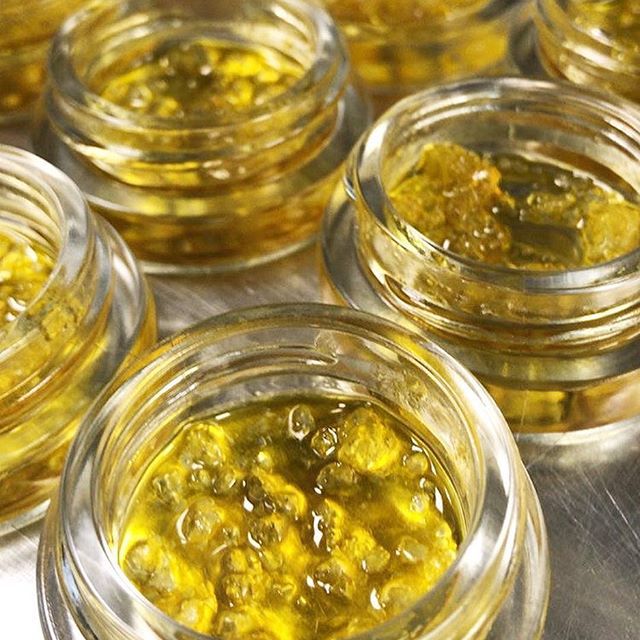 Live resin is a kind of butane hash oil which is made from the fresh and frozen marijuana plant which is frozen at the earliest after its harvest. Fresh Cannabis plants have a different strain of terpenes as compared to cannabis, which is dried traditionally.
A live resin doesn’t necessarily contain only a more significant concentration of cannabinoids or terpenes as compared to an extract made by a cured flower. Because of the abundance in the types of strains and techniques for extractions used to produce live resins, a large variety exists today.
The factor that distinguishes live resins, among others is the amount of turpentine content present in large amounts than these extracts usually contain. On Average, live resins contain a healthier amount of terpene concentration as compared to traditionally extracts. They are also responsible for creating a far more stinging smell, complex and higher class of terpene concentration is responsible for delivering an increased high, it is the cause of terpenes can combine with cannabinoids such as CBD and THC.

These are the factors that influence why live resins have come to the top of the cannabis extraction process as compared to the traditional method of cannabis extraction. People enthusiastic for marijuana extracts place a large price on taste and smell, along with the effect of the extract. This is why cannabis bearing ‘Live Resin’ sell for a higher price and are in higher demand in the marijuana market.

The cooling of fresh cannabis plant makes sure that the matter has a larger water content than the typical cannabis matter processed by the cured and dried plant. Above certain temperatures, Butane is water soluble. This is why live resin is processed at a specific temperature to avoid contamination of the fresh live resin. Fresh cannabis plant extracts are frozen at a temperature of -20 and -50 degrees Fahrenheit to stop the butane toxins from contaminating the extract when the butane is washing it infused solvent.

Drying by the vacuum of the cannabis extract to remove the impurities and Butane is the final step of the process. The temperature is kept at a boil-off point because of the vacuum chamber.

The fresh and cool extraction process of the cannabis produces a matter with a high concentration of terpenes as compared to other methods and creates a far more lightweight molecule, and volatile produce like that of Terpinolene and Myrcene which are lost at the normal drying process because of the high temperature.

Terpenes are one of the most important organic compounds with uses in plants and insects as well; they are used as a medium for signalling a lot of things which includes fighting predators and attract pollinating insects and animals. Emission of these terpenes in the form of water vapours by trees forms clouds.

Almost all organisms use terpenoids as it is a significant component in biological processes for the synthesis of new daughter cells and other processes. They are also found in essential oils like limonene and lavender, etc. which are used for therapeutic means.

Terpenes are very valuable when consuming cannabis as they help in modifying the effect caused by the cannabinoids such as THC and CBD while being of therapeutic importance by themselves as well. The frozen extraction process of live resin makes a far better product than the natural method because the cold extraction process produces a product with more therapeutic use.