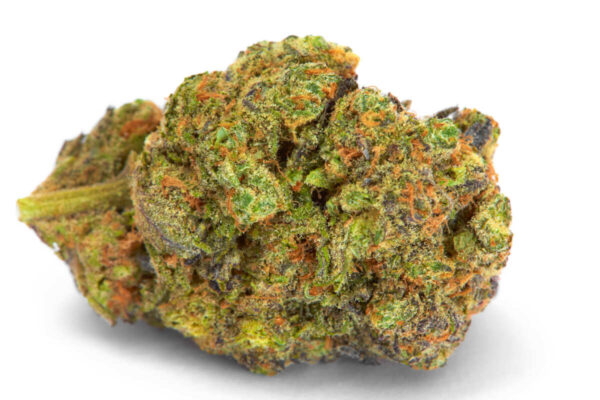 Mochi Gelato, also known as Gelato 47 or Mochilato or Mochi, is a perfectly balanced hybrid marijuana strain developed by Sherbinskis, a breeder based in San Francisco. The strain was named after a Japanese frozen dessert. Mochi Gelato marijuana strain is a highly potent strain resulting from a cross between Sunset Sherbet and Thin Mint Girl Scout Cookies. Its THC averages 21%, but some growers have reported a whopping 29%.

GROWS INDOORS AND OUTDOORS IN SUNNY ENVIRONMENTS AND HAS A FLOWERING PERIOD OF 9-10 WEEKS.

Mochi Gelato has a typical Indica Structure: short and bushy. The strain produces dominant purple hues in all its parts. It is also distinguishable with dense buds with elongated, spade-shaped dense olive-green nuggets. These nuggets are characterized by red hairs and coated with thick frosty purple-tinted white crystal trichomes.

Mochi Gelato cannabis strain is moderately difficult to grow. Due to its dense, bushy structure, this strain may be susceptible to mold and mildew. However, you can cultivate it indoors under controlled conditions or outdoors in sunny environments. It takes about 9-10 weeks to flower and be ready for harvesting in late September and early October. Mochi Gelato produces an average yield of about 0.5 ounces per sq-feet indoors.

Mochi Gelato strain is not only an attractive flower but also has incredible fragrance and delicious taste. Fruity and sweet smell dominates its buds. If you are familiar with the Mochi Gelato Japanese dessert, identifying how this strain smells won’t be a problem for you. Inhaling and exhaling the smoke from Mochi Gelato reveals sweet, tangy, and creamy notes with undertones of vanilla, mint, and berry.

Mochi Gelato is a highly potent cannabis strain with a high that begins with a cerebral rush that erases any negative thoughts in your mind. You will feel euphoria as your body sinks into a mild relaxation. This strain can leave you glued to the couch if you are not tolerant to high stimulations. It is the best for evening use, but you can also take it moderately during the day.