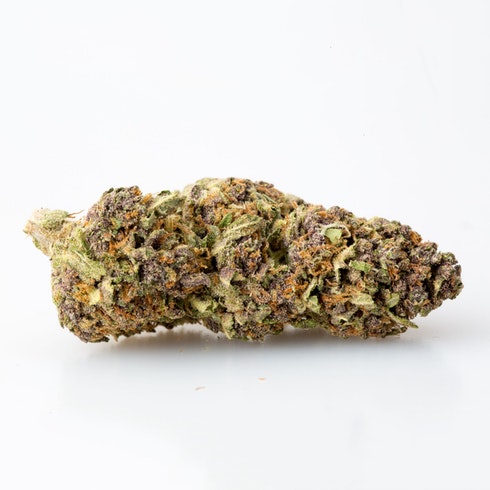 Jager, also known as JGR, is an Indica-leaning hybrid comprising 80% Indica and 20% Sativa. There are many theories about the origin of this marijuana strain. Some people believe that its lineage can be tracked down to Southern Oregon, while others think it is a phenotype of Hindu. Another group also holds on to it as a descendant of LA Confidential and Blue Dream. Despite the mysteries surrounding its origin, Jager remains a famous flower widely reputed for its relaxing effects. It is a very potent flower with a THC level of 23%.

The Jager plant develops large chunky flowers with spade-like shapes, tapering down from a broader base to a narrower tip. The buds exhibit a typical Indica structure with dark green leaves and rusty pistils sticking out. Some phenotypes display purple streaks resulting from exposure to cold conditions during the growth period. The flower is also covered by a layer of amber trichomes, giving them a sticky texture.

Any aspiring grower can simply buy them to start the process. You can alternatively use clippings from the mature plant. Cultivators classify Jager as an easy-to-grow marijuana strain. Even novices can get a relatively high yield because it is very resistant to diseases such as mold. It is grown indoors and outdoors, but outdoor conditions should be a semi-humid, Mediterranean climate. You can expect a yield of about 2.3 ounces per square foot from this strain.

Jager Marijuana strain is known for its sweet berry flavor and a sweet earthy licorice aroma that persists on exhale. It produces a delicious smooth smoke that makes it enjoyable to use. Some users have also reported a woody lemon taste from Jager buds.

The high of Jager is characterized by the typical Indica full-body buzz that becomes relaxing and can slowly lull you into sleep. Many users have reported having been couch-locked at high doses. You will also feel sedated and blissful, making this strain the best for stress relief. Other medical uses include treatment of chronic pain, inflammation, tremors, and muscle spasms.