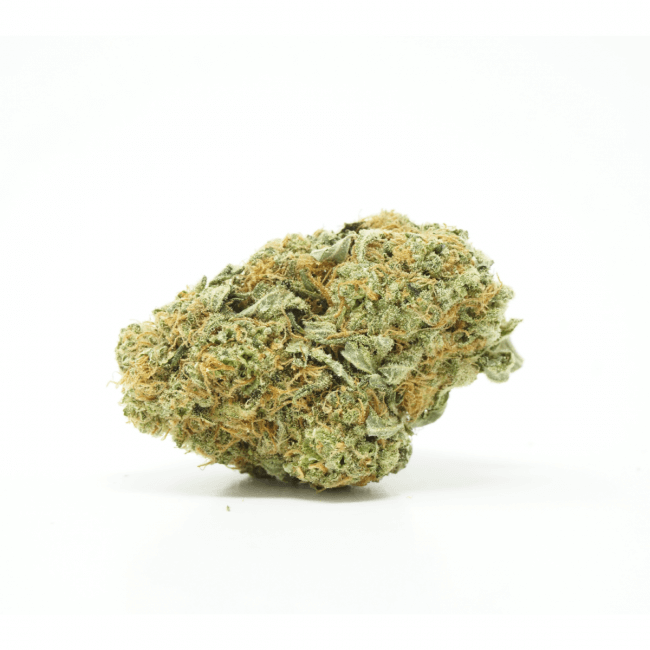 Grapefruit is a hybrid weed strain consisting of 70% Sativa and 30% Indica. It is a cross of Cinderella 99 and an unknown Sativa landrace devised by Nectar Seeds. It is not as potent as other popular Sativa-leaning hybrids, having THC levels of between 15% and 20%. Grapefruit may not be a popular flower, but it still remains one of the most valued strains in the cannabis world.

Grapefruit typically produces football- and cone-shaped buds with fluffy calyxes. Despite being rounded, they are not very dense. The structure tends to be Sativa-like. The outstanding features of this strain are the heavy amounts of peach-colored pistils that emerge out of their general light-green color. Its leaves may also have purple hues.

Grapefruit is classified as an easy to grow strain. It takes about 8-9 weeks to mature and is ready for harvesting towards the end of September or early October. When grown indoors, it can reach a height of up to 100cm and yield 500g per square meter. Outdoor growers can expect about 300g per plant.

This cannabis strain has a strong citrusy aroma with sour grapefruit notes when you take the bud too close to your nose. If you have an acute sense of smell, you can catch the earthy and skunky scents exuding from this flower. The citrusy aroma is associated with a bitter taste of Grapefruit. The breakdown of this complex flavor profile reveals both sugary and zesty tastes with acidic notes. Some smokers have also reported sour flavor.

Grapefruit is best described as a morning strain that leaves users more energized and prepared to face the day ahead. It is also ideal for socializing as you will become more talkative. These effects have been associated with the cerebral high of Grapefruit that will leave you feeling good and happy. Some users have also reported a moment of improved creativity and sedative-like quality that makes you relaxed.